The House of Ludmila and Karel Herain

The first of three constructions in Baba by Ladislav Žák is a house for the director of the Museum of Decorative Arts in Prague, Karel Herain, and his wife Ludmila. Once again, it shows the very modern and distinctive eye of Ladislav Žák. This time it takes the form of an original half-cylindrical staircase leading from the ground floor to the sundeck with a roof awning on top. The shape of the staircase gives the house an aerodynamic and nautical character. The strips of windows on all floors are consistently oriented towards the view of Prague Castle and the Vltava valley. 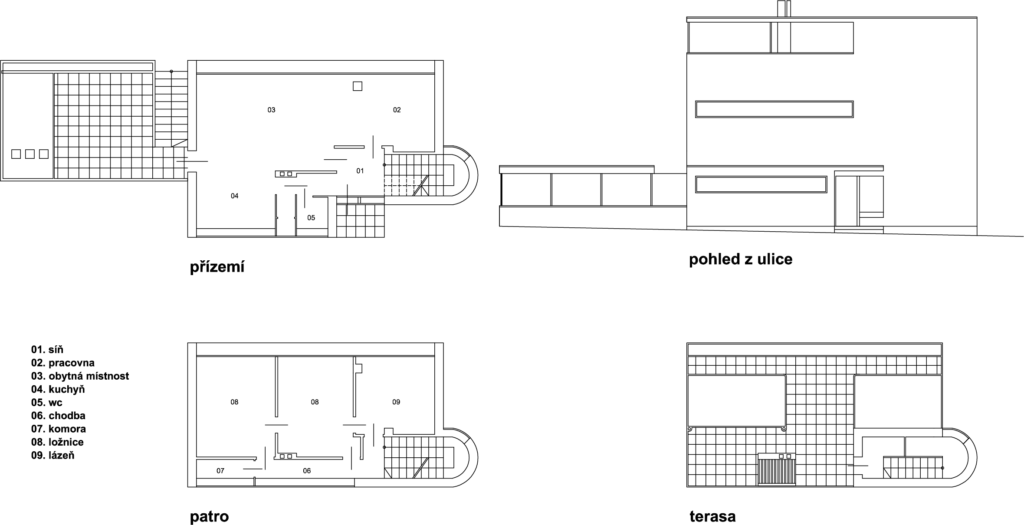 An architect, painter, interior and furniture designer, theoretician, and teacher; a student of Josef Gočár at the Prague Academy of Fine Arts. During his stay in France, Germany, and the Netherlands, he was interested in functionalist buildings, Bauhaus architecture, and Dutch rationalism. Three exceptional houses in Baba (Zaorálek, Herain, and Čeněk) marked the culmination of his functionalist work in which he applied the functionalist principles: a free floor plan, large rooms connected to outdoor sundecks, bright façades, and strip windows. His work also shows characteristics of the nautical (cabin-like) style: rounded shapes of buildings and windows. For example, he put a captain’s bridge on the roof of the Herain villa. Even his interiors and furniture displayed functionalist and purist characteristics. Following a falling-out with the builders, he focused on landscape architecture and urban planning, which he summarised in the publication Obytná krajina (1947). Under the socialist regime, he remained a lecturer at the Prague Academy of Fine Arts thanks to the architect Frágner.

reconstruction of his own residential building with small apartments, Prague-Letná

1946
memorial to the victims of WWII, Ležáky

Karel Vladimír Herain (1890-1953), an outstanding Czech art historian, was a great advocate of modern design and architecture. He was also a member of the exhibition committee of the Baba estate. In 1932, he compiled a representative book entitled On Housing, together with the graphic artist Sutnar and the architect Žák. After 1948, Karel Herain was forced to involuntarily leave his position as the director of the Museum of Decorative Arts in Prague and he devoted the rest of his life to his private art collection. The current owner is successfully seeking to faithfully preserve the original character of the house.

drawing with caption: Dr. Herain is looking at the panorama...; the author is probably Ladislav Žák
Karel and Ludmila Herain in the garden of their house in Baba, late 1940s
garden design
the south façade of the house
the Herain House (left) with the Mojžíš-Lom House (right)
the visually unique west façade of the house, 1930s
title page of the construction permit
original documentation and plans from the exhibition catalogue
Menu