The House of PhDr. Václav and Jarmila Maule

Contrary to the customs of all the other model houses in Baba, Josef Gočár positioned the living space of the house for Václav Maule, the department head of the Ministry of Education and National Enlightenment, on a raised ground floor and there was a large living room and a bedroom upstairs. He thus offered the inhabitants of the villa a more stunning view of the Prague panorama from an elongated living space lined with a strip of windows. The house belongs among the four more comfortable villas in Baba and is characteristic of Gočár’s stylish elegance. 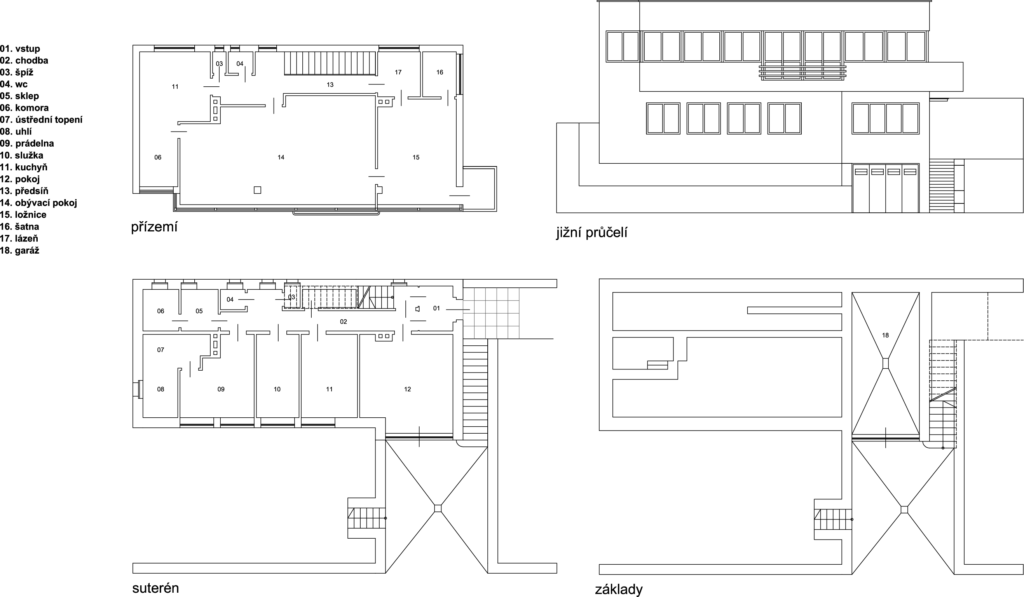 An architect, professor, urban planner (Hradec Králové and Pardubice), and designer of furniture and articles for daily use. Josef Gočár was a generally respected figure of Czech architecture; he influenced many of his students and the following generations of architects. His works display the world’s rarity of Czech cubism in architecture (the iconic House at the Black Madonna) and rondocubism (the Legiobanka building, Na poříčí Street), the influence of constructivism or even designs in the national or Art Deco style. His professional life culminated with functionalism; the villas of the Baba estate (the Maule, Kytlice and Glücklich Houses) or the Church of St. Wenceslas in Vršovice. In 1925, he received the Grand Prix for his design of the Czechoslovak pavilion at the International Exhibition in Paris and, in 1926, he received the Order of the French Legion of Honour.

1902-1905
studied architecture with Professor Jan Kotěra at the Academy of Arts, Architecture, and Design in Prague

1908
member of the Mánes Union of Fine Arts

1911
co-founder of the Cubist Group of Fine Artists

1924
professor at the Academy of Fine Arts in Prague

1927
member of the Czech Academy of Sciences and Arts

1934
corresponding member of the Royal Institute of British Architects (RIBA)

1920
Czechoslovak Pavilion for the trade fair in Lyon

PhDr. Václav Stanislav Maule (1884-1945) was the head of the department of universities from 1937; he translated Brehm’s Life of Animals and Frank Hurley’s Pearls and Savages and he also contributed to the bulletin of the Royal Czech Society of Sciences. He was a member of the Czechoslovak Werkbund and participated actively in the preparation of the Baba estate exhibition. In 1944, he was taken to the Terezín concentration camp. He returned to his wife Jarmila and to Baba in May 1945 and died of typhus soon afterwards.

Nad Paťankou Street, the Maule House in front
Jarmila Maule in her house in Baba, 1930s
PhDr. Václav Maule sitting in front of his home in Baba, May 1945
Nad Paťankou Street, the Janák House (right) and the Maule House (left)
title page of the construction permit
original documentation and plans from the exhibition catalogue
We use cookies on our website to give you the most relevant experience by remembering your preferences and repeat visits. By clicking “Accept All”, you consent to the use of ALL the cookies. However, you may visit "Cookie Settings" to provide a controlled consent.
Cookie SettingsAccept All
Manage consent