The House of Ing. Karel Dovolil

Pavel Janák designed the two-generation house for his friend and a great advocate of functionalism, Karel Dovolil. He made excellent use of the slope of the terrain when positioning the house facilities, investor’s office, and a small apartment for the caretaker. The roof of the separate garage also serves as a terrace connected to the balcony of the room. This terrace is connected to the garden by a steel staircase. The front façade facing the street has windows, unlike the other houses. 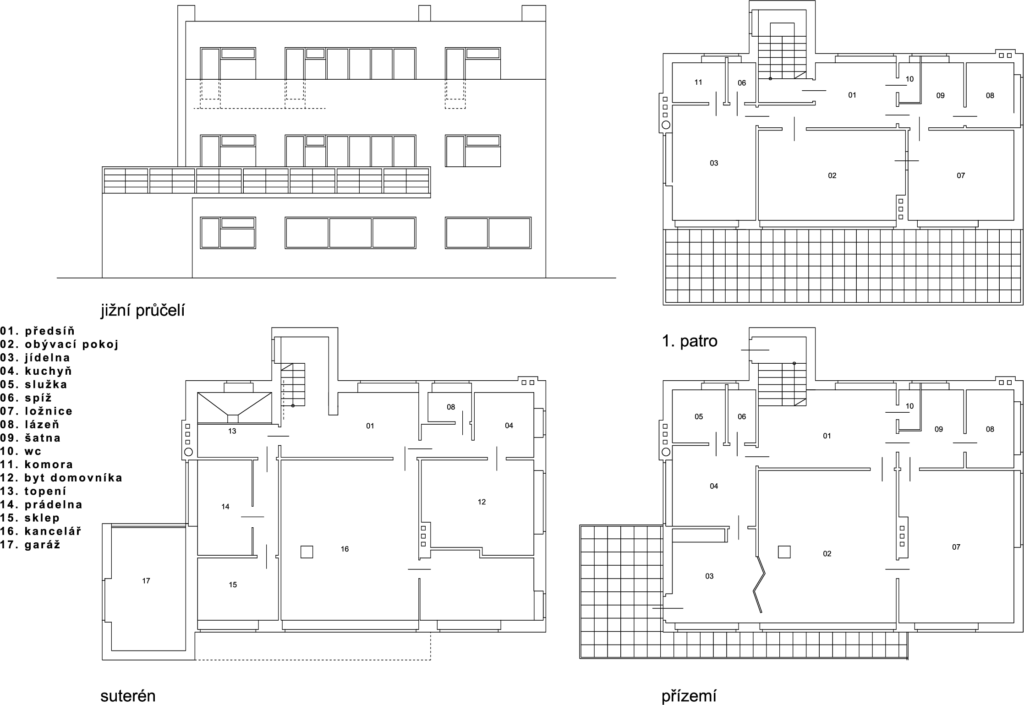 An architect, urban planner, designer of furniture and decorations, professor at the Academy of Arts, Architecture and Design, and architectural theoretician. He studied technical studies in Prague at both the Czech and German schools, as well as at the Academy of Art in Vienna. He worked with Josef Gočár at Jan Kotěra’s studio. His works go through several distinct phases: his first period is consciously focused on modernism, then he becomes the leading representative of Czech cubism. He then goes through a period of national style only to end up being entirely devoted to functionalism. He was a long-standing president of the Czechoslovak Werkbund, the main initiator of the functionalist Baba estate, and the author of Baba’s urban plans. In the Baba estate, he designed the Dovolil House as well as his own house.

1902-1903
studied at the German Technical High School in Prague

1907-1908
cooperated with the studio of Professor Jan Kotěra in Prague, study trips to Italy

1908
member of the Mánes Union of Fine Arts

1919
state exam at the Czech Technical University in Prague

1921
Professor at the Academy of Arts, Architecture, and Design in Prague
member of the Czech Academy of Sciences and Arts

1935
corresponding member of the Moscow Academy of Architecture

1925-1934
reconstruction and extension of the Czernin Palace, Prague-Hradčany

1927-1928
pavilion of the Academy of Arts, Architecture, and Design at the Brno Exhibition Centre

1934-1935
villa with a studio for the sculptor Josef Mařatka, Prague-Střešovice

1948-1950
renovation of the Riding Hall, extension of garages and terraces, Prague Castle

1950
renovation of the Hall of Ball Games, Prague Castle

In 1932, Ing. Karel Dovolil (1899-1955) moved into his new home with his wife Jarmila and first daughter, also called Jarmila. His wife Jarmila was a bold and active woman for that time. To her, the functionalist-style window to the kitchen seemed to provide insufficient light, so despite Janák’s proposal, she negotiated with the workmen to enlarge the window, which surprised her husband when he came home from work. The famous architect was hurt by this purely practical female decision. In the Protectorate period, like many other Jewish residents of the villas, Karel Dovolil had to face bullying from his infamous neighbour in Baba, the Czech Nazi Bautz, but he was also forced to close down his engineering practice. He worked for his brother-in-law in his paper company until nationalisation. However, he was not allowed to continue in his line of business. He worked as a water manager at VODOTECHNA until his sudden death. His daughters Jarmila and Hana still live in this unique two-generation house in Baba today.

Karel and Jarmila Dovolil with their daughters Jarmila and Hana, 1940
his daughter Jarmila skating in the garden of the house in Baba, 1930s
the house under construction, 1932
Jarmila Dovolilová with her daughters (wearing white) after the liberation in 1945
Jarmila Dovolilová, 1930s
the house after completion, 1932
title page of the construction permit
original documentation and plans from the exhibition catalogue
We use cookies on our website to give you the most relevant experience by remembering your preferences and repeat visits. By clicking “Accept All”, you consent to the use of ALL the cookies. However, you may visit "Cookie Settings" to provide a controlled consent.
Cookie SettingsAccept All
Manage consent