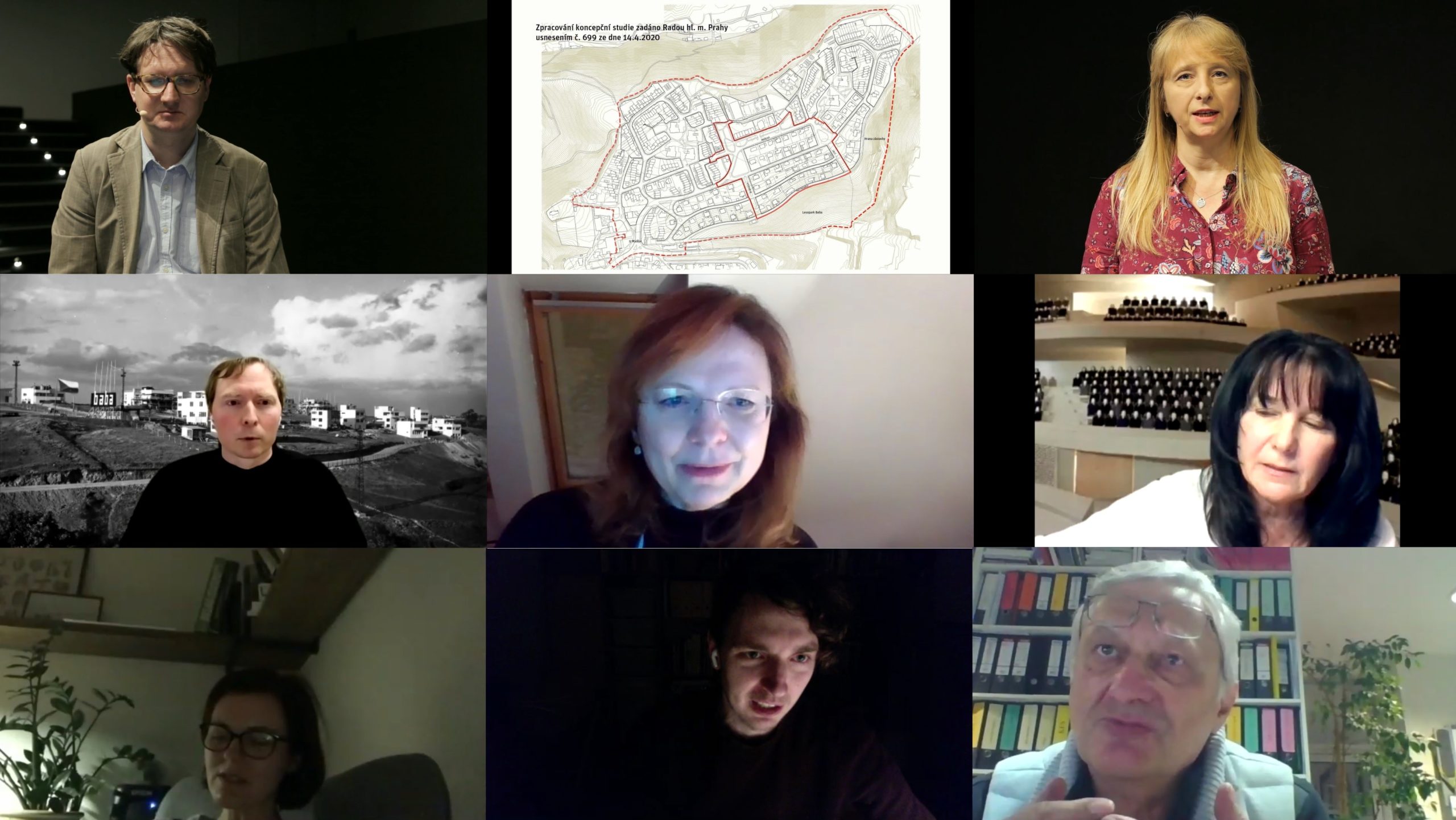 There is now a recording of the entire webinar on the IPR Prague website. We will also make all other information and materials available here.

On Tuesday, 9 February 2021, the first information webinar was held to engage the public in the proposal for the revitalisation of public spaces at the Baba Colony. The Institute of Planning and Development of the Capital of the City of Prague combined the planned and necessary reconstruction of utility networks in this part of the city with the comprehensive renewal of elements of public space, local permeability and the creation of infrastructure for possible tourism. The meeting was prepared to acquaint the local public with the project’s design and management team and to take questions. Public involvement in spatial planning, also known as participation, is as much about communication and discussion as it is about planning itself. Introductory video presentations by architect Martin Špičák from IPR Prague, Simona Vladíková from Prague City Hall’s Department of Heritage Care and Šimon Vojtík from the Archum Architekti studio were followed by two rounds of discussions with the audience.

The goal of the webinar was to explain what conceptual studies can bring and how important it is to involve the local public in the process of their creation. Naturally, the conceptual study cannot solve   the many problems in the area raised by participants at the meeting. The city is a complex organism in which many different administrators – the city districts, City Hall and its service organisations – take care of the elements of public space. However, the study is a path to friendlier, more comfortable and dignified public space that complements the character of a cultural monument. At the next level, participation can help popularise many other topics and help address them.

Civic participation in urban planning is not yet a common part of city development, though the situation is significantly improving. A certain distrust on the part of the participants in the possibility of the study and the fulfilment of the objectives, which was evident from the discussion, is therefore understandable. From the point of view of the participants in the discussion, the area of Prague’s Baba Colony suffers from many problems, only some of which are in the power of the study to resolve. However, there was more or less agreement that the modifications to the street network, ensuring better access to the landscape, creating new and cultivating existing public spaces, together with non-disruptive service for visitors can be beneficial for the whole area, especially for its inhabitants.

In the coming months, we will work with the public to reach an understanding of the problems, values and opportunities for the development of public space so that we can propose the best possible solutions. A question that arose directly from the discussion was whether there would be some form of local referendum or other voting on the study. The team of conceptual study implementers tried to explain that the systematic participation of the public in a multi-stage discussion ensures more than a referendum on a professional solution could offer. It guarantees the public a participatory process that not only takes into account their needs, but also provides a clear explanation of how architects, urban planners, water managers and politicians were brought into the study. The public will be able to influence both the proposed amendments and comment on the draft version of the proposal. Participation is not about voting on the least acceptable proposal, but about understanding the needs of the public and translating this comprehension into proposals for concrete implementations.

Another follow-up step is a survey as a basis for understanding the public’s approach or view of the current state of the Baba Colony. It will take place in late February/early March 2021. It will contain emotional maps (a record of problems, values and opportunities of public space on the map) and closed questions testing pre-identified problems. But most importantly, it will contain open questions providing interested parties with enough space to explain their ideas in detail. Residents of the Baba Colony will find a link to the internet survey in their mailboxes, while others can find it on the website of the Prague 6 district, the Prague Institute of Planning and Development website, on social media and elsewhere.

PrevPreviousThe success for the Czech Republic is the appointment of prof. Vladimír Šlapeta by a member of the German Werkbund.
NextSurvey for a conceptual study of the revitalisation of the Baba Housing Estate and its surroundingsNext