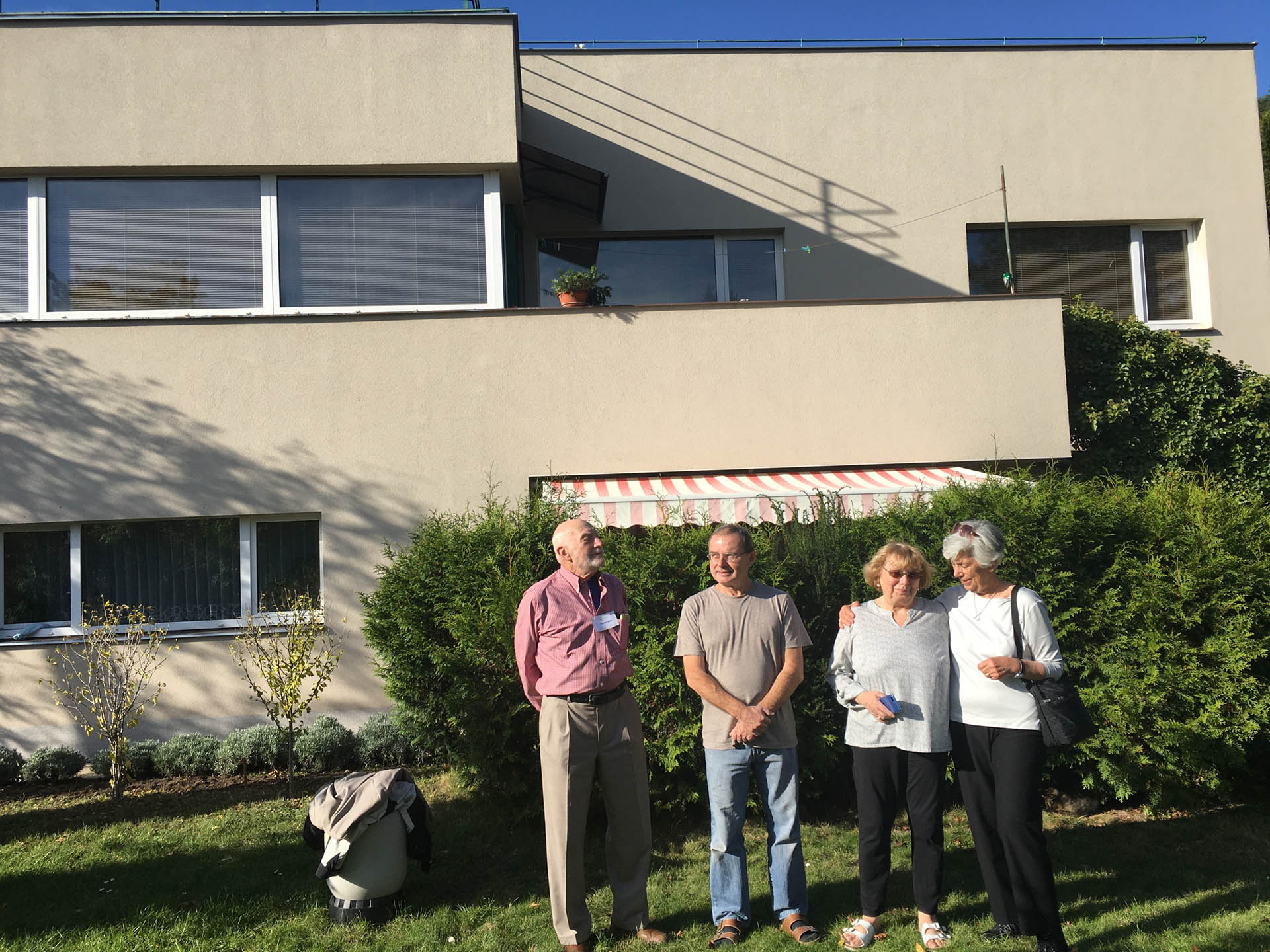 THE HOUSE ON BABA WHERE I WAS BORN

Mrs. Suzanne Munk Ragen, the daughter of the investors of the first villa in Baba, the Munks, provided her authentic text entitled “The house in Baba where I was born.”

It is odd to write a memoir about a house that has no first hand memory for me. But I was born from that house and left it suddenly when I was two years old. It still stands on a hill overlooking the fairy tale city of Prague. It feels like a living part of my past because of stories told to me by my parents and photographs they have saved. There is even a picture of my father proudly holding a shovel on a barren hilltop, ready to take the first step in breaking ground for his family’s new house. As an adult, I have visited the house several times. The most recent visit was in the summer of 2007, when Brooks and I were there with our nine grandchildren and three children and their spouses.

In the early 1930s my father was one of the founders of the Bauhaus style Werkbund development named Baba. The name comes from an old Bohemian word of affection for grandmother, as the hilltop site has ancient historical and mythical memories. The group of men who developed Baba were largely intellectuals and businessmen who considered them enlightened representatives of the new Czechoslovakian democratic state. My father told of the great enthusiasm among the founders, and lively political discussions over the tops of the low garden fences.

The cubist architecture of all the houses was very modern, very avant-garde at the time. Prague was famous for its pastel baroque and rococo and art nouveau buildings, all curves and elaborate Hapsburg statuary, oddly shaped windows and balconies and pointed roofs. Our house had straight lines, a flat roof, huge plate glass windows and was covered with smooth white painted concrete. The interior was also minimalist, with built in cabinets and clean open spaces. All the houses around it were a similar geometric aesthetic, but with different sizes and floor plans. No two were alike because they had different architects and were built for specific families. My parents hired Josef Fuchs and Otokar Fischel as their architects. Baba was the only Werkbund housing estate in Europe that was financed by private clients. These were single family dwellings with individual but harmonizing landscaping.

My parents, Nadia and Frank Munk, moved into the just completed house in 1933. My brother Michael was born in 1934. I was born in 1937. By then, those lively political discussions over the garden fences had taken on a dark and anxious tone. In Germany Hitler was preparing to take over Europe. In May of 1938 he invaded and annexed Austria and on September 30 of that year Hitler, Mussolini, Chamberlain and Daladier met in Munich and agreed to cede one third of Czechoslovakia to Germany, the infamous “Munich Agreement”. Prime Minister Chamberlain returned to a cheering England, declaring that they had insured “peace in our time”.

IN April 1939 German tanks rolled into Prague and up the hill to Hradcany Castle, the seat of Czech government. There was a late snowfall that day. My father was one of many Czechs who stood silently, with arms crossed, some in tears, to watch the tanks go by. The lead driver unbelievably asked for directions, and my father recalls that no one replied, pretending not to hear or to understand German. (A strange aside here is that Brooks and I were rummaging through old LIFE magazines in a book store about ten years ago, and we found an April 1939 issue which showed just that scene, as it was so often described by my father.)

It was becoming clear to my parents that they would need to leave the country because my father was very involved in the Czech government. He was also a Jew but that was not the most immediate reason to be worried at that time. My father wrote in his memoirs: “One day in May a man came to my office. After closing the door carefully, he showed me the ID card of the former Czech Secret Service. I was flabbergasted: this was two months after the German invasion and to identify oneself this way was out of the question. The man then said: ‘I am to show you a little paper.’ And he showed me an order by the Gestapo to arrest all members of the Economic Committee of the Socialist Party. My name was on top since I had served as its chairman. He then left, but I did not have to be told anything more.”

Complicated arrangements were hastily made with the help of the Red Cross and a Quaker friend, Beatrice Wellington, as well as the Rockefeller Institute in New York, where my father had been a Rockefeller fellow. A reservation was made for the four of us on a Kindertrain that was taking Jewish children out of Prague through Holland to England.

We left our house on Baba hill on May 20, 1939. It was a Saturday and my parents told the cook and nanny that we were going away for the weekend. My mother told her mother and sisters the same thing, not knowing if she would ever see them again. My parents each carried a small suitcase. My father’s was a round black leather bag with brown leather trim and his initials FM. I still have that case. Michael and I were each allowed one toy; my choice was a large wooden decorated egg that held many tiny toys. I still have that egg, but the tiny toys are long gone.

We took a taxi to the Woodrow Wilson train station, and in only 30 minutes the train reached the border of Germany. That border was policed by the dreaded SS in their black uniforms with the skull and bones emblem on their caps. A most anxious moment for my parents was the detailed examination of our exit documents. My father called this the most stressful moment of his long life. But my father had once done a favor for a station agent there, and he managed to speed us through, by insisting that the train continue on schedule. Our long journey to America had begun.

My parents would not see the house on Baba they had built with such high hopes for many years. Soon after we left, it was taken over by a German officer’s family. When my father did visit Prague during his work for UNRRA after the war, he found it vacant and with several bullet holes in the living room walls. We have never learned the story behind them.

I have been to that house in the 1970s with Brooks and my parents. We walked the streets, and my parents told us of the excitement of building their house and helping to plan the whole development. They were amazed at how the trees had grown and the gardens filled out. They said that the houses looked about the same as when they left. They told us about their neighbors, quite a few of whom were still there for us to meet. They had thought that they would return to Prague after the war, but when they learned that the Communists would be occupying the country, they decided to stay in America. They then sold the Baba house.

After my father died in 1999, Brooks and I took my mother to Prague for what turned out to be a final reunion with her five sisters and one brother. The week before our arrival, my Uncle Vladimir died; his funeral was postponed until we arrived. On the calendar by his bed, he had written “Nadia arrives today”.

In the summer of 2007 we visited Prague with our children and nine grandchildren. A few months before our trip, I wrote a letter addressed only to THE FAMILY WHO LIVES AT 5 NA VRSKU STREET, as I did not know the name of the people who lived in our old house. I promptly received a response by Email from the son of the widow who lives there that we would be welcome to visit her. A date and time were set and all 17 of us arrived in front of that house on Baba hill in our little private bus. Pani Hoffman was waiting for us with both her sons and their wives and two grandsons. It was a warm and sunny afternoon. She had prepared delicious little sandwiches, Czech pastries with poppy seeds and apricots, fruit juice and tea and the family entertained us in the charming garden. Then she invited us inside.

The interior of the house had changed little since our previous visits. In fact, little had changed since the photos from my parents’ time. We all climbed the outdoor stairs to the roof terrace to admire the view of Prague. We could see those fairy tale spires, Prague Castle, and the Vltava River with its many bridges. I remembered a photo of my father on that same terrace, wearing a suit and a hat and leaning on the iron railing, full of pride and hope.

The children understood that I was born there, but that must have seemed like ancient history to them. What really impressed them was when one of the Hoffman grandsons removed a painting from the wall and showed them a bullet hole put there during the Nazi years. It had been carefully preserved as a little piece of the history of the house on Baba hill.